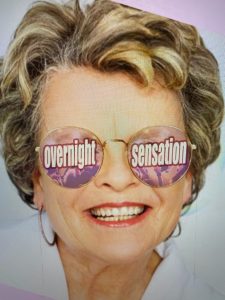 Written and Performed by Deborah Kimmett

Overnight Sensation is a hysterical comedy that finds Kimmett on the eve of her first old age security cheque, asking if it’s too late to become an Overnight Sensation. (She may even be pushing the limit on being called a Late Bloomer!)

“Kimmett is the funniest comic out there. She delivers smart and sassy humour.’
– Steve Patterson (Host, CBC’s The Debaters)